Let me start by saying the Bigfoot hydraulic leveling system is one of the best out there.  Powered extend and retract, and in the case of the system I have, automatic levelling and separate pumps for each jack.

When I bought my rig, used, the control panel always showed all jacks were up.  Everything worked fine, except automatic retract, and I wouldn’t get an audible alarm if I turned the key with the jacks down.  A little bit of troubleshooting pinpointed the limit switches as the problem.  It was obvious that they were rusted and not making contact.  When passing through Bigfoot’s neck of the woods, just inside Michigan north of Middlebury, IN, I stopped in to see about buying new switches.  Evidently, they’re not that expensive, and probably fail with some regularity–they sent a guy out to meet me in the parking lot with a bag with four new switches and the splice connectors to install them.

It looked pretty simple.  The switches threaded into a fitting welded to the side of the hydraulic cylinder, and I’d have to cut and splice the two switch wires back into the harness.  The front two switches turned out to be about that simple–a little bit of wrestling getting them loose, but overall not too bad.

The back was a different story.  They’re right behind the rear axle, and had been sprayed with all manner of road debris, salt, rain, etc., for over 200,000 miles.  They were in tight.  The fitting that holds them in sits very close to the cylinder, and the switch itself is such that you can’t get a deep-well socket onto the nut.  Essentially, the only two options left were a closed-end wrench, which was too thick to fit between the nut and the cylinder, and an open-ended box wrench.

The box wrench would show that it wasn’t going to be strong enough to turn the nut.  We’d tried all the tricks to loosen the rust on the threads.  What now?  Well, the existing switch was going to be trash anyways, so we cut the plastic upper part off, leaving just the metal nut.  That allowed a socket to fit on.  Home free, right?  Not so fast–the socket got us a good grip, enough to twist the nut free of the threaded portion, still solidly held in place.

Time for plan B.  Leave the unsealed switch behind for one that’s meant to be in a nasty environment.  Here’s what I ended up with: 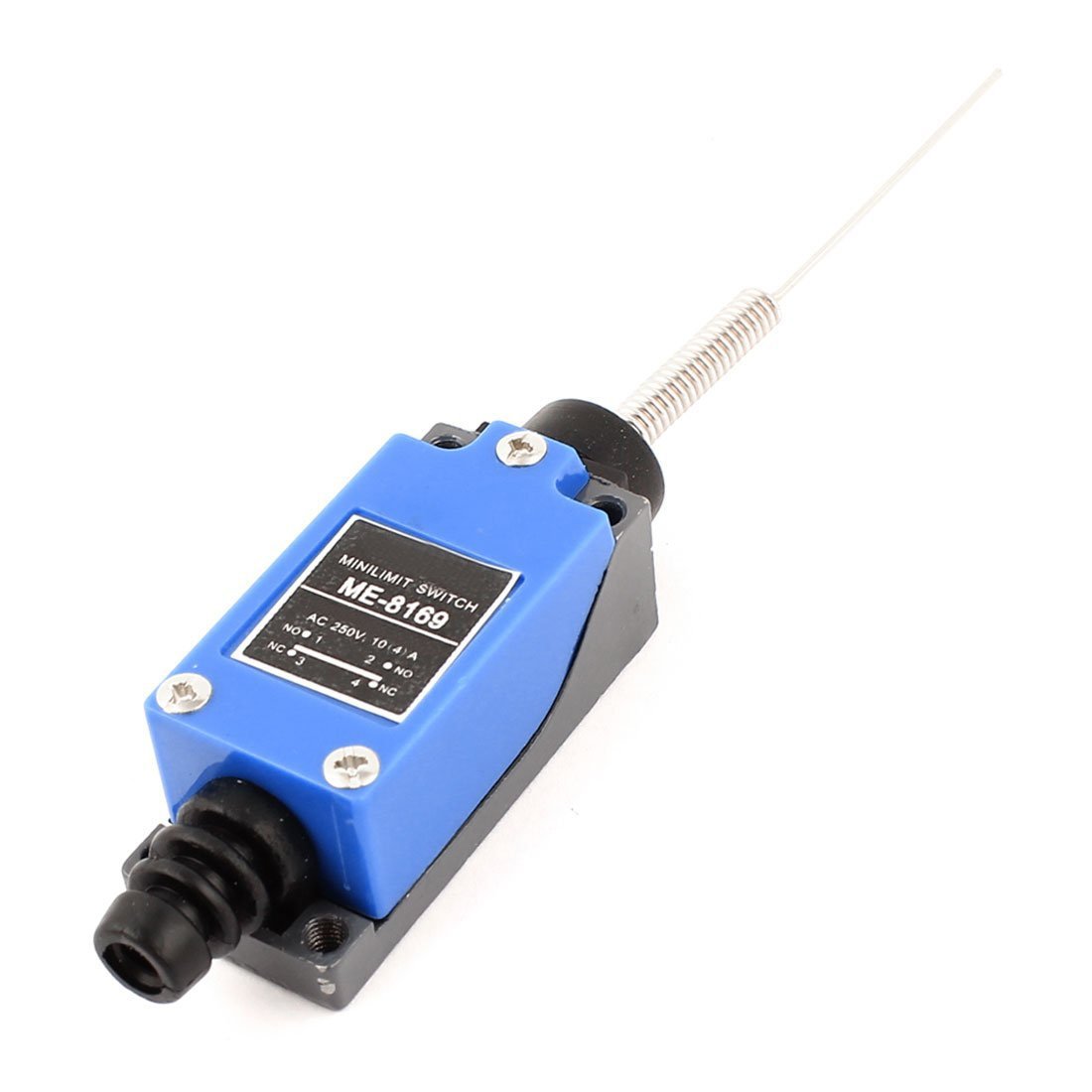 It’s an ME-8169 Flexible Coil Spring Arm Limit Switch, available for less than $5.  As cheap as it is, and not coming from a name brand, I wasn’t expecting much.  It was mounted with a hose clamp around the hydraulic cylinder, and the springy actuator meant that we didn’t have to get carried away with how accurately it was mounted–going beyond where the switch actuated just meant that the actuator flexed, instead of breaking the switch.

That took care of one of the other problems with the original switch.  Inevitably, especially when parked in mud or gravel, stuff would end up on the jack pads.  If it was stiff enough, it would actuate the switch early, and would either crush the switch internally or bend (and jam) the actuator pin.  This was less of a problem with the upgraded jack feet (that’s another post), but far from ideal.

After almost 2 years, both switches still work reliably.  The front ones work too, so the factory style may be good enough if you can get the old ones out.  But even at a fraction of the price of a real, name-brand industrial limit switch, the flexible actuator switch is a step up from the factory design.