Want to read about the kitchen remodel from the beginning?  Click here.

We’re finally at a point where I can talk about something that is a little more unique.  Previously, at the left end of the kitchen, there was a cabinet section with 3 drawer fronts and the subwoofer for the sound system.  The top drawer front was a tip-open panel that covered switches for the water heater and tank heaters.  These have already been relocated (here) along with the subwoofer, which allows the drawers to extend vertically higher and lower than before.  With the sink mounted further to the right,  the depth of the drawers is limited only by the equipment attached to the inside of the exterior wall and the switch panel.  Previously, the two drawers were only about 16 inches deep, now they’re 25!  That extra depth and the additional drawer (which is 11 inches high) means that a lot of the space lost from getting rid of the pantry drawers has been regained.

That alone would have been a nice improvement, but I decided to complicate things a bit.  Years ago, I saw a pull-out countertop section in a Chariot truck conversion–and thought it was a neat idea.  I thought that this location would be perfect, and decided to see if I could make it work.

I made the sides of the pull-out with 3/4″ plywood, and had to get a little creative when I realized that the sink would still interfere with the top drawer (we moved it left last-minute to avoid a narrow piece of countertop at the front right corner).  You can see that in the image at the top of this post.

I also wanted to conceal the drawer glides, but wanted to keep using the same style of soft-close full-extension glides I had been using.  To do this, I didn’t put a bottom on the pull-out, and mounted the drawer glides on the inside of the plywood sides.

It was going to take some framing inside the cabinet anyway to support the stationary part of the glides, so it really didn’t complicate it that much.

Originally, I had planned on making the side panel of the (stationary) cabinet a solid piece.  At some point while putting the switch panel together, I realized that I could make another face frame on that end, and give myself a door that would let me get to all of the wiring.  It would be tucked away at the back of the cabinet, but extend the pull-out, open the door, and everything is easy to see.

In the next two pictures, you can see the extension opened, and that there’s still room to fully open the drawers when the slide-out on the opposite wall is open. 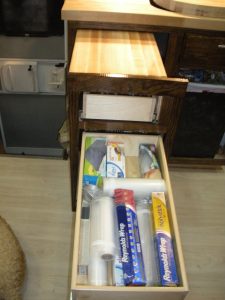 The top for the countertop extension didn’t come from the same piece of butcher block as the rest of the counters.  There just wasn’t quite enough to make it all work.  I didn’t want another big piece, and the smallest they sold was more than I wanted to spend.  A quick search turned up a maple cutting board that was big enough, and the same thickness.  I ran down the two edges with a router to allow the cutting board to sit on the top edges of the plywood sides–it won’t go anywhere, but it can be easily lifted out for cleaning.

I’m still going to add an outlet on the pull out so that it’s a short reach to use a small appliance on it.

What do you think?  I’m sure there are a number of rigs out there where something like this could be built even if you weren’t tackling a complete kitchen re-do.

P.S.  If you look at the sink cover, it’s turned around backwards.  There’s a roast cooking sous vide in the sink, like this.