Well, not necessarily more remodeling, but I thought I’d update with a few short reviews on the appliances used and my thoughts on the layout having lived with it for almost a year now.  Since it was the first to go in, I’ll cover the refrigerator in this post.

The RV refrigerator that had been in here since 2004 was a Norcold N1095.  Unlike some of the newer versions of that model, the door hinges were metal, so the doors hadn’t fallen off, but the seals were aging and it needed a little help to fully close.  While being able to run on propane was nice, it wasn’t the most efficient thing in the world–average electric consumption in temperate weather was a little more than 200W.

That was certainly high, but par for the course I suppose.  It was working, but I decided to replace it.  I wanted something that fit the opening with minimal (if any) trimming, it needed to be energy efficient, and I wanted as much capacity as possible.  After doing a lot of searching (and using AJMadison to see just about every model out there), I started eyeing a 9.2 cubic foot bottom freezer model from MagicChef.  It fit the opening, looked sharp, and was EnergyStar rated.  Interestingly, when I first looked at it in person at Home Depot, it was $397.  In the time I waited before pulling the trigger, HD decided to make it a non-stocked item at the store near me, and they put the stock they did have on sale at $298.  When you consider that I would have had very nearly that much in seals and hinges, it seemed like a no-brainer. 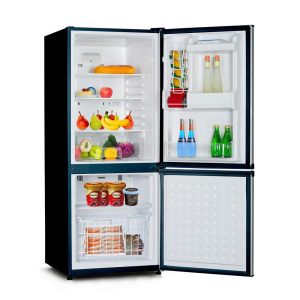 Installation was pretty straightforward, though I did end up doing just a little trimming.  The back of the refrigerator fit through the face frame on the cabinet, but there was just enough bow in the cabinet that it wouldn’t quite go back in.  A little trimming on the left edge and it was quickly in place.

It was plugged in with a power meter, and I was immediately pleased.  With the compressor running, it was only drawing about 70W.  Having had it for a year and a half now, it has averaged about 35W in varying temperatures–from sub-freezing temperatures in the winter to many days in the 90s (with direct sun on that wall) in the summer.

Okay, so the energy consumption is quite good–about 1/6th of the old refrigerator.  But what about the inside, and actually using it?

Let’s start at the bottom, with the freezer.  There’s nothing on the door at all–I didn’t like this at first, but I’ve gotten used to it.  The nice thing about nothing in the door is that it’s very lightweight.  With nothing other than the magnetic seals to keep it closed, it has never opened in travel.

The big basket is just a little bit of a hassle pulling it out to get to stuff, but it does mean that nothing falls out when you open the door.  If I had my choice, that basket would ride on a real drawer glide so operation was a little smoother.  The shelf above it is plenty useful for larger things that need to be flat.  While nothing down here is adjustable, it has served my needs just fine.

Moving up to the refrigerator, the first thing that jumps out right away is how much brighter it is.  Instead of a festoon-style bulb that’s both inefficient and not that long-lived, this refrigerator has an LED array at the top of the back wall of the refrigerator.

The clear plastic drawer at the bottom is quite large–considerably taller than the drawer in the old fridge, and being a single drawer instead of two meant that you can ultimately pack stuff in more efficiently.  Being truly clear instead of smoked makes it easier to see what’s inside.

The other really nice upgrade from the Norcold refrigerator is having glass shelves.  I can’t count the number of times the old refrigerator became a mess because something leaked–maybe a package of uncooked meat, or even just a stopped up drip tray under the evaporator–but a similar spill in the new fridge is no big deal, as I only need to clean that one shelf.  And instead of having to wipe each wire, it’s a smooth easy-to-clean surface.

Door storage is a mixed bag.  I love the deeper shelf at the bottom.  I can keep a gallon of milk and just about all of the condiments there.  The next shelf up has plenty of room for tall items, with a small shelf above that, but they are only about 2/3 of the width–the left side of the door has a can dispenser, which I’m not crazy about.  If you were solo and had only one type of beverage you drank from a can, I suppose it would be fine.  But with a little variety, you’d be emptying it to get what you wanted.  I’ve contemplated taking the wire frame out and making a small shelf or two in that space.

Unlike the RV refrigerator, this does have moving parts, and you can hear it run.  When I first got it, I thought it was a little loud at times, and eventually found that the condensate tray on the back side was pushed up against one of the refrigerant lines.  After repositioning it, it’s rare that I ever notice it cycling on.

The stainless front panels on the doors still look good-as-new (and are a lot easier to keep clean than the microwave and range), and I’m really happy overall.  I’ve anchored a couple of small L brackets on the top of the refrigerator door, and use a small clip to keep it closed while traveling.  It’s not the most elegant, and I’ve forgotten to use it on a number of occasions, but generally does the job just fine.

When I get back to talking about the battery project, I’ll cover more of the ins-and-outs of running this thing off of batteries.  But for most of the first year, it didn’t run while traveling (sometimes for 2+ days) and everything stayed cold enough.