After a couple of dense, long posts that were kind of dreary in tone, it’s time to shed some light on a set of viable options for RVers.  Generally, what I’m referring to in this post are Health Care Sharing Ministries (HCSMs).

WARNING: This series of posts about insurance contains some political commentary, along with both religious concerns and alternative lifestyles. If you’re offended by an approach to managing medicals costs that doesn’t offend someones preferences (religion, diet, or otherwise), this post probably isn’t for you.

What is healthcare sharing?

Generally speaking, it’s an arrangement whereby members share payment of medical expenses among members.  That sounds a lot like insurance, which it is.  With insurance, the underwriter promises to pay claims while the policy is in effect.  An HCSM promises only to use future sharing contributions (the analog to premiums) to pay for future medical expenses.

Unlike insurance, an HCSM “does not use actuaries, does not accept risk or make guarantees, and does not purchase reinsurance polices on behalf of its members.”1  In other words, if expenses exceed what’s coming in, members don’t have an obligation to contribute more to pay your bills, and there’s no promise of payment should member contributions fall short.

It also means that, but not being insurance, an HCSM isn’t subject to keeping funds in reserve or a whole set of insurance-industry regulations that vary by state.  By not being regulated at the state level, an HCSM can accept members from all 50 states and beyond, and share in expenses incurred outside the United States.

What qualifies an HCSM for the ACA ‘s penalty exemption?

Since most HCSM members would not also purchase insurance, it’s worth just a little bit of time to go over the requirements for participation in an HCSM to qualify for exemption from the ACA’s “shared responsibility payment,” more commonly known as the penalty for being uninsured.  Those requirements are:

Given the inception date requirement, there will be no new HCSM organizations that qualify without legislative changes.  Currently, most guides list six organizations:

By joining one of these organizations, you’re in the company of illegal aliens, incarcerated prisoners, and members of Congress in qualifying for an exemption from the penalty!

What’s the appeal of a HCSM?

The big appeal of HCSM organizations is a much, much greater degree of flexibility.  Since it’s not required to provide the same benefits of an ACA plan, they can provide the coverages most of the membership wants, while excluding certain high-cost services, or services that may be somewhat controversial or run afoul of religious beliefs.

Perhaps more importantly, an HCSM is by definition a non-profit organization.  Your contributions are going to pay for someone else’s medical expenses and for a minimal amount of staffing to process expenses submitted.  Your contributions don’t have to provide returns for investors, buy reinsurance, support state regulatory activity, or keep money in reserve.  That means that a sharing organization can provide similar or better service at a much lower cost.

Can I Qualify for Membership?

It depends.  One of the requirements of qualifying for the ACA exemption is a common ethical or belief system.  Depending on the organization, those requirements can be fairly simple, or can involve more complicated religious commitments.  They may require things like abstaining from extramarital sex, tobacco, and/or alcohol use, or agreeing to attend worship services regularly.

These plans try to strike a balance between controlling costs (i.e. encouraging healthy behavior) and enrolling enough members so that the plan is stable month-to-month.  In general, if you can deal with the ethical/belief requirements, you’ll probably qualify at least in some form.

Cutting to the Chase…

I’m going to get into a more detailed comparison of the six sharing organizations, but I realize I’ve already talked for too long about insurance.  I’m using Liberty HealthShare, and have been since the beginning of the year.  A few reasons I chose them over other sharing organizations are listed below:

All of the promised benefits in the world aren’t worth much if Liberty isn’t able to provide them, or if it’s a difficult process.  I’ve only had one doctor visit so far.  That visit was a routine visit to my allergy doctor.  It was the exact same service as a previous visit, so it provides an interesting opportunity for comparison.

Short of a funny look at the card, this was just like presenting my BCBS card.  I hadn’t noticed it previously, but by submitting a bill to Liberty directly, the provider agrees to a fixed reimbursement and to forego any balance billing.

This means that if the provider submits a bill after meeting the AUA, I’m not left paying the excess charge over what Liberty negotiates or allows for covered services.

The card also spells out reimbursement rates as a fixed percentage over published Medicare rates for the area–150% for physicians, 160% for inpatient, and 170% for outpatient services.  No more guessing what the insurance will allow for a particular service.

Since my doctor submitted bills for $420 in both cases, I could compare them.  With my BCBS plan, the negotiated rate was $298.20.  My plan had a $35 co-pay for office visits, so that’s all I was responsible for, but it also didn’t count toward my deductible.

With Liberty, that $420 bill became $360.90.  Already, the plan saved me $59.10, and I’m now only $139 from satisfying my $500 AUA amount.  But note that the doctor is getting $62.70 more in total under the Liberty plan.  That bodes well for doctors accepting the program.  Could it be that both patient and provider end up happier under this program?

I had difficulty finding anything published that showed the performance of the organization.  Were they paying $1,000/month or $1,000,000/month?  Were they satisfying all of their members’ needs?

Liberty does include information in their newsletter showing the amount of qualified claims submitted for sharing, and the amount  shared against those claims.  The chart shows the data since I enrolled, and gives a feel for the size of the organization.

Note that in every month except February, member contributions satisfied 100% of sharing-eligible expenses.  In February, contributions fell short, but not alarmingly so.  We’ll see how it looks going forward, but seeing $6-12 million dollars processed monthly gives me peace of mind. 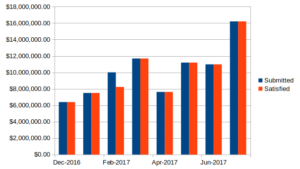 So far, I’m very happy.  I have an arrangement that more-or-less provides what I’m after. That it comes at a rate less than half of what I would have been paying for a “when I’m home” plan is very nice.

I’m not getting anything for talking about this, other than the satisfaction of supporting a market-based cooperative organization free of the heavy-handed regulation found in traditional insurance.  I’d be glad to answer questions for anyone who has them, either openly via comments below, or via e-mail to [email protected].

As time permits, I’ll gradually fill in comparison of the various HCSMs.  While Liberty works for me, other organizations may suit you better.

Jump ahead to the next part in this series: HCSM Comparison Part 1: Religious and Ethical Standards