Every once in a while, you have a nagging project that you put off because it’s easy.  This is one of those.  I’d had a problem with the mount for the factory 12V power outlet on the dashboard of the Grey Ghost–the mounting tabs had worn to where it didn’t stay put.  Since there’s a second 12V outlet right next to it, and this one always had a USB charger in it, I decided to make that more permanent and fix the sloppiness at the same time.

The replacement part was this round power port with 2 2.1A USB ports.  It’s just slightly larger than the power port it replaced, and with a locking nut from behind, won’t have the same problem with falling out:

To install it, I used a sanding drum on my Dremel tool to just slightly enlarge the opening, put the power port through and locked it in place. For the wiring, I simply took the two female spade conectors out of the factory plug and fit them over the male spade terminals on the power port–they were conveniently the same size.  So no cutting or splicing, and now there’s one less thing flopping around in the cab. 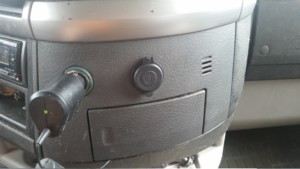 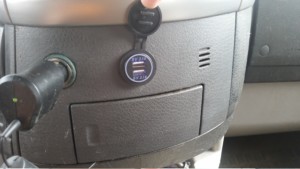