Ok, here’s one that comes up all the time.  You’re looking to add to your battery bank, possibly in conjunction with a solar install, and are eyeing a non-vented space.  AGM batteries to the rescue?  Not so fast.  AGM batteries must still be vented.  Here’s why:

AGM batteries are a type of valve-regulated lead acid battery.  They are “maintenance-free” in the sense of not requiring the addition of water to offset hydrogen gas released during the charging process.  The glass mat in the battery absorbs the hydrogen produced prior to it escaping to the atmosphere allowing it to remain inside the battery.

Let’s take a look at a few industry standards, and what they say about the subject.  First, the ABYC:

10.7.9
A vent system or other means shall be provided to permit the discharge from the boat of hydrogen gas released by the battery.

10.7.10
Battery boxes, whose cover forms a pocket over the battery, shall be vented at the uppermost portion of the cover.

NOTE TO 10.7.9 and 10.7.10: These requirements also apply to installations of all batteries whether they employ removable vent caps, non-removable caps, are “sealed” or “maintenance free” batteries, or have pressure regulated valve vent systems with immobilized electrolyte (gel batteries).

Location of Batteries and Battery Charger (see ABYC E-10, Storage Batteries). Consideration should be given to the following:

– Adequate ventilation should be provided to the bank of batteries to limit the temperature rise during the charging. Sealed valve regulator batteries do allow escape of hydrogen gasses during overcharging; therefore, SVR batteries require the same precautions for ventilation as wet (flooded) batteries.

The Recreational Vehicle Industry Association’s Low-Voltage similarly requires venting for all battery locations, whether or not batteries are actually installed, and prohibits installation of other potentially spark-producing equipment in the same compartment (e.g. inverters, charge controllers, disconnect switches):

Battery compartments shall be ventilated with openings having a minimum area of 1.7 square inches (1097 mm2) within 2 inches (50.8 mm) of both the top and bottom.

Components identified or outfitted for the purpose of housing batteries, such as by the presence of battery cables, shall meet or have provisions for meeting the above requirements.

Note that RVIA doesn’t specifically address battery chemistry.  The presumption is two-fold.  First, AGM batteries still need vented on their own accord.  Second, there’s little assurance they would be replaced with AGMs in the future.  A flooded lead-acid battery has the same external dimensions and terminal connectors and can be easily interchanged.

If that isn’t good enough, take it from one of the battery manufacturers: 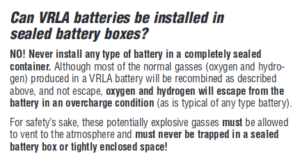 But the “valve-regulated” part of the battery description refers to a vent.  In the case of AGM, it’s a pressure-relief valve, usually opening between 1 and 2 psig. Charging too quickly produces hydrogen at a rate faster than it can be absorbed into the glass mat.  If this occurs long enough, pressure will build inside the battery, and could force the valve to open.

When this occurs, you’re suddenly releasing the accumulated hydrogen into the battery compartment.  So you still need a location that’s free of ignition sources, and open to the atmosphere to dissipate the gas.

At about double the price, why buy AGM?

There are two key reasons to consider AGM batteries over flooded or “wet cell” lead acid batteries.  First, there’s no water level to check or maintain.  Second, by not having off-gassing under normal operation, you will see less corrosion in the battery compartment.  That reduces maintenance of cables, and prolongs the life of other metal components in the battery bay.

Of course, lithium ion batteries can be significantly cheaper, if you’re willing to take that leap.