Eating is fun in its own right, but it can also be a chore.  Last time we talked about food while you happen to be in Iowa City, and before that, where to stay when you visit.  Finally, today, we actually talk about some of the fun events and attractions in the old capitol city.  To  be clear: it gets cold during the winter in Iowa.  They may put on a wonderful Christmas festival or something. I wouldn’t know.

https://summerofthearts.org/sota-events/friday-night-concert-series/
https://summerofthearts.org/sota-events/free-movie-series/
I group these two events as they’re both all-summer, weekly entertainment.  The shows must go on–all have alternate indoor locations in the event of bad weather.  Put on by the Summer of the Arts organization that also hosts the Arts, Jazz, and Soul Festivals, these series present a great opportunity to take in casual entertainment downtown.  Movies are a mix of new and old titles, and musicians encompass a wide range of genres.  Bring your own chair and relax!

It covers a good portion of the downtown area, but is still easy to get to and explore, attracting enough people and artists to be worthwhile, without being so big you’re fighting crowds.  Like a lot of the events downtown, there’s plenty of food to go with the entertainment, with a section of Iowa Avenue reserved for food vendors and a beer and wine garden.

https://summerofthearts.org/sota-events/iowa-city-jazz-festival/
Held in the first weekend in July, the Jazz Festival makes use of the Old Capitol grounds to set up a stage and a large, open-air amphitheater.  If you like jazz, or the kind of food that can be sold from truck/trailer, you’ll enjoy it.  Even if that isn’t your thing, show up on Sunday for a Jazz finale that rolls into the Independence Day fireworks display.

https://downtowniowacity.com/events/downtown-block-party/
On one hand, this event sounds like just another excuse to close off a few streets downtown and set up a bunch of funnel cake vendors.  Admittedly, I kind of had that thought.  But its purpose and feel is quite different.  If you’ve ever visited the central business district of a college town, or the strip of businesses who serve the student population, you quickly notice how slow things can be during the summer.  Summer was always when the mom-and-pops served a final meal.  Summer was when a seemingly healthy business was replaced by a boarded-up storefront.

The Iowa City Block Party is a relatively new event, with 2018 just its second year.  Unlike many of the weekend festivals, the block party opens and closes in the same evening.  The first year drew more than 30,000 people to downtown, and this summer counted more than 42,000.  You can bet it’ll be back, with one seasoned restaurant owner telling us it was already her best day ever, with her second-best day being the 2017 event.

The block party is an event put on by a private organization, the Iowa City Downtown District, whose members are businesses in the downtown area.  The purpose of the block party, besides having fun, is to draw people to those local businesses present year-round.  It’s primarily an evening event, with lots of entertainment spread over the downtown area.  Unlike some of the other events that have a designated beer garden (fenced in), the block party has a special accommodation allowing you to wander the streets cup-in-hand.

Admission is free, but buying a $10 event ticket gets you a cup that allows you to drop in to a bar or restaurant for a drink, and walk out the front door and enjoy it out on the street.  Similarly, all of the events were completely free (sponsored by local businesses)–if you want to spend money, step into a shop or grab a bite to eat (many of the restaurants set up extra tents with partial menus so you didn’t have to step away from the fun).  Here’s some of what was going on:

https://www.iowacitypride.org/
Yes, Iowa City leans left politically, so far in fact that the only thing keeping it from falling over is all of the leaning right in surrounding counties.  Iowa City’s event traces its roots to 1970, and the first anniversary of the raid at the Stonewall Inn in New York City.  You could certainly say it has historical significance in that regard, as one of the oldest events of its type in the Midwest.

But it is still the Midwest, with all of the small-town camaraderie you’d expect.  It isn’t where you’ll find people shouting at each other over differing political views, suggestive gestures, or anything less than weather-appropriate clothing.  It’s like a lot of the other Iowa City events–friendly crowds who visit, chat, and try to figure out what sounds good for lunch.  Expect a fair number of exhibitor booths and food vendors, but don’t think it’s the kind of event showing graphic images or selling sex toys.  Most of the exhibitors that aren’t selling food are local charities of one form or another.  The parade is the main event, and you’ll see many (if not most) major employers, chuches, and civic groups participating.  Think banners with people following behind, not Macy’s Thanksgiving Day floats.

http://coralville.org/310/4thFest
Where Iowa City celebrates Independence Day in conjunction with the Jazz Festival weekend, Coralville celebrates on the fourth, even when it’s in the middle of the week.  Coralville is essentially a contiguous suburb of Iowa City, and is home to most of the big-box shopping centers.  It 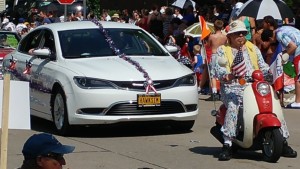