I mentioned last time that I wasn’t happy with the efficiency of the 12V power supply I installed for running the lights, water pump, furnace, and a few other smaller items.  How bad was it?  Well, putting out 2 amps at 12.3V, it was drawing 52W from the wall outlet.  That’s less than 50% efficiency, and while it isn’t a lot of power being wasted, I expect this power supply to be on 100% of the time–so in terms of total energy wasted, it would account for a pretty big chunk.  At 5A output, it was a little better, but still needed 100W in (60% efficiency).  Could a computer power supply do a better job?

Swapping it into place wasn’t anything particularly exciting–when powered on, everything seemed to work as expected.  Taking a few measurements, it was able to put out 4A with 60W in.  That’s markedly better than the other power supply and right about 80% efficient.  Keep in mind this is a non-PFC power supply, that doesn’t even earn a bronze label for efficiency.  Given how it’s performing, I’ll probably upgrade, just to see how much better I can do, and to get one with modular cabling to clean things up a bit more.  Many PC power supplies have a single 12V rail capable of over 50A, so it’s not out of the question for one to be able to do everything, including the slide-out. 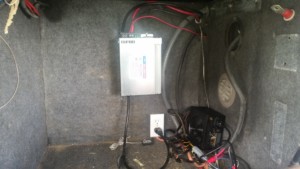 Another thing that was definitely noticeable was the difference in noise level.  The RV converter, as well as the power supply I’d been using, both had fans that could be quite loud, even when the power being drawn was pretty minimal.  The PC power supply is silent in comparison.  Maybe I’ll eventually relocate it right next to the DC distribution panel, just a few feet from where my head rests on the pillow at night.

I went ahead and finished connecting the old RV converter to the chassis batteries.  That required moving some pretty big cables around, but now the converter will take care of making sure that I’m always ready to turn the key and drive off.  Again, it’s overkill, but it was also already there.

I also took the time to clean up some wiring.  There was a lot that was pulled out simply because it wasn’t doing anything anymore, like the cables running to the old battery bay, and extra length on the cables that were re-routed.  After trimming things up, I had the pile of wire you see above.

Now the slide-out runs faster now than it ever has, without sounding like it’s straining. I can’t be sure whether just cleaning up the wiring or changing the power source had a bigger effect.  As a bonus, with depleted house batteries, I won’t need to fire up the generator to get enough charge to close it up. 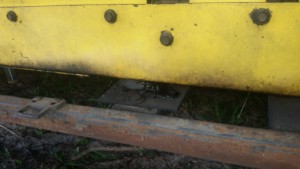 Now, while crawling around I did make note of something else that needs attention.  Three (out of 4) of the generator mounts are in pretty bad shape.  PowerTech showed a mount that should fit, but at over $60 each, they seemed way overpriced.  We’ll know in a couple of days, but I think I found the same mount elsewhere for about $30.  I’ll report back on how that turns out.