You never want to hear the water pump cycle on when no one is using water.  There’s only one thing it could be…a leak.  Now we aren’t talking about something every few minutes, or even every few hours.  It was more like once every few days, but I knew I had a leak.

Most of my plumbing is at least somewhat accessible, and it’s all above the floor, so you wouldn’t think it would be that hard to find.  Yet looking at all of the usual suspects–fixtures, valves, the washing machine, dishwasher, pump and tanks, etc.–there were no obvious signs.  It was probably at least a couple of weeks later that I finally found signs of something wet–the carpet around the water pump.

Ok, so the water pump and/or fittings around it are leaking.  Why wasn’t it more obvious?  The drips were running down the underside of the pump body, down one of the legs, and under the carpet.  Just replacing the pump head would be simple enough (I’ve done it before…), but this time stuff was wet.  I wanted the rest of the carpet gone too. 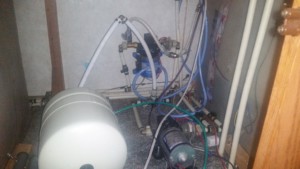 So there’s what the area around the pump at the end of the tank looks like, through the access door.  There are two pumps–the closest one on the floor is the leaky one that feeds all of the normal stuff; the wall-mounted one just feeds an outside faucet from the rear water tank.  Since I’ve never used that faucet, and that water tank really wasn’t integrated with the other two, it was kind of a waste.  And now I needed a pump–so it would seem there’s an opportunity to do some plumbing.

That sounds like a lot, but really shouldn’t be too bad.  Right?

Here’s what it looked like when I got some of the old stuff out, and started pulling up carpet: 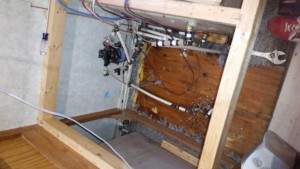