With anything I carry in the RV, it’s nice when it can perform more than one function.  Such is the case for my FoodSaver vacuum sealer–it gets used regularly preparing food for the freezer, and for cooking sous vide.  But it also falls in the “tool” category as well. 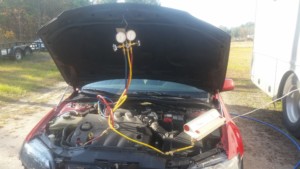 How’s that?  Well, it’s actually a pretty good vacuum pump. I had to replace the air conditioning condenser on the car, and the FoodSaver has been called into action (on more than one car, no less) to pull a vacuum to get it ready for charging.  On the bottom of the lid, there’s a hose connection that will fit an 1/8″ hose barb, and with another fitting, can adapt to the flare fitting on the AC gauge set.

It may not be the fastest, but it’s able to meet the manufacturer’s  charging spec (-14.6 psig) in less than a minute.  I tend to run it a little longer for good measure, but it’s probably not necessary.

So what about my FoodSaver?  It was a hand-me-down when I graduated from high school, and has been with me ever since.  It’s not exactly pretty–the white plastic has yellowed some–but it still works just fine, now at a little more than 25 years old.  I’ve repaired the heat strip once during that time, but it was just a matter of re-gluing the protective cover in place.

So–if you want another gadget for the kitchen, and need to convince the mechanic it’s good for him (or her) too, there you go.  If you’re the tool buyer, expand your budget just a bit by showing it works in the kitchen too!