by DavePosted on September 16, 2018April 9, 2019
We didn’t get up early.  Well, at least I didn’t get up early.  I was out cold, and didn’t wake up until after 10:00.  Good thing we didn’t have morning plans, right?  We needed to get our tech situation resolved, in full LTE cellular data glory.  We’d researched the international offerings from domestic carriers, and none were nearly as good as what we could get once we got to Europe.  We had several choices, and settled on a plan from EE, who had a store back at the Canary Wharf mall where we had eaten dinner the previous night. Missed the beginning of the trip? Start here. I should have mentioned it earlier, but one of the more important things to do for navigation is to download offline maps in Google Maps before you head out.  Navigation capability is somewhat limited offline, but far better than nothing. There were a few things we needed to be sure about.  We wanted true high-speed data in continental Europe, which would be roaming with a British carrier.  We also wanted to verify the data caps, which were different depending on the carrier when roaming.  And we wanted to spend as little as possible.  We hopped on the DLR, at the station next door to the apartment, for a quick ride to a station right at the mall.  For the first time, we tried cell phone NFC/Google Pay payment, and it worked flawlessly.  We got to the store, and began chatting about what we needed, and got our new SIM.  Since I had a factory-unlocked phone with all of the bands necessary ([amazon_textlink asin=’B072357PH2′ text=’this one’ template=’ProductLink’ store=’rvne-20′ marketplace=’US’ link_id=’88ab75e9-b5e0-11e8-8a27-b98576df8fc5′]), it was as simple as putting in the SIM to switch networks, though we did have to manually enter APN settings.

Now that we were online, we had full access to public transit information and navigation, which we’d use extensively the rest of the trip.  What sounds good for dinner?  Let’s look.  How do we get to Buckingham Palace?  Let’s look.  What’s of interest where we are? Let’s look.  What time does the store close? Early, but let’s look.  How much is a speeding ticket in Germany? Let’s look.  Not enough to worry about.  What does “IG-L” mean under the speed limit sign in Austria?  Let’s look. Environmental speed limit with fines in the thousands.  How do we turn on the speed camera alerts in the rental car?  Let’s look.  What does a white sign with diagonal black slashes mean?  Are you kidding?  No self-respecting car guy would need to look that up.  Hammer down.  At least once we get to Germany. It wouldn’t have been a big deal to have things planned out in advance, as tourists have done since the age of traveler’s checks.

Cue Google.  Navigation downtown.  All of the train times, lists of stops, etc., along the way.  We looked at a couple of recommended tour routes for hitting some of the highlights, and had a pseudo-plan, that we sort of followed for maybe a few minutes.  Two DLR trains and our first underground and we were there. We stepped out of the station, and got our bearings.  First stop was a Starbucks for Andrew to get coffee, then St. Paul’s Cathedral.  I’ll spare the details, and show a few pictures (we didn’t take too many though).  Basically, we briskly wandered from place to place, taking in the sights very casually.  It seemed that no matter what we were looking at or where we were, the next opportunity for food was always part of the  discussion. We visited a few museums, went to Trafalgar Square, saw Tower Bridge (and would return at night), and a bunch of other seemingly random stuff.  I certainly enjoyed just looking around, taking in architecture, history, and–of course–all of the makes and models of cars and trucks that you can’t get in North America.  According to Google, we walked 8.7 miles, took rides on the London transit system at least six times, and arrived back at the apartment a little after midnight.  As always, click on the pictures to enlarge. 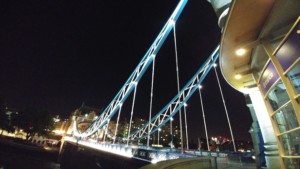 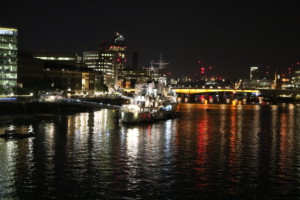